Our friends at Independent Liverpool recently wrote some very nice words about us. Read them here... 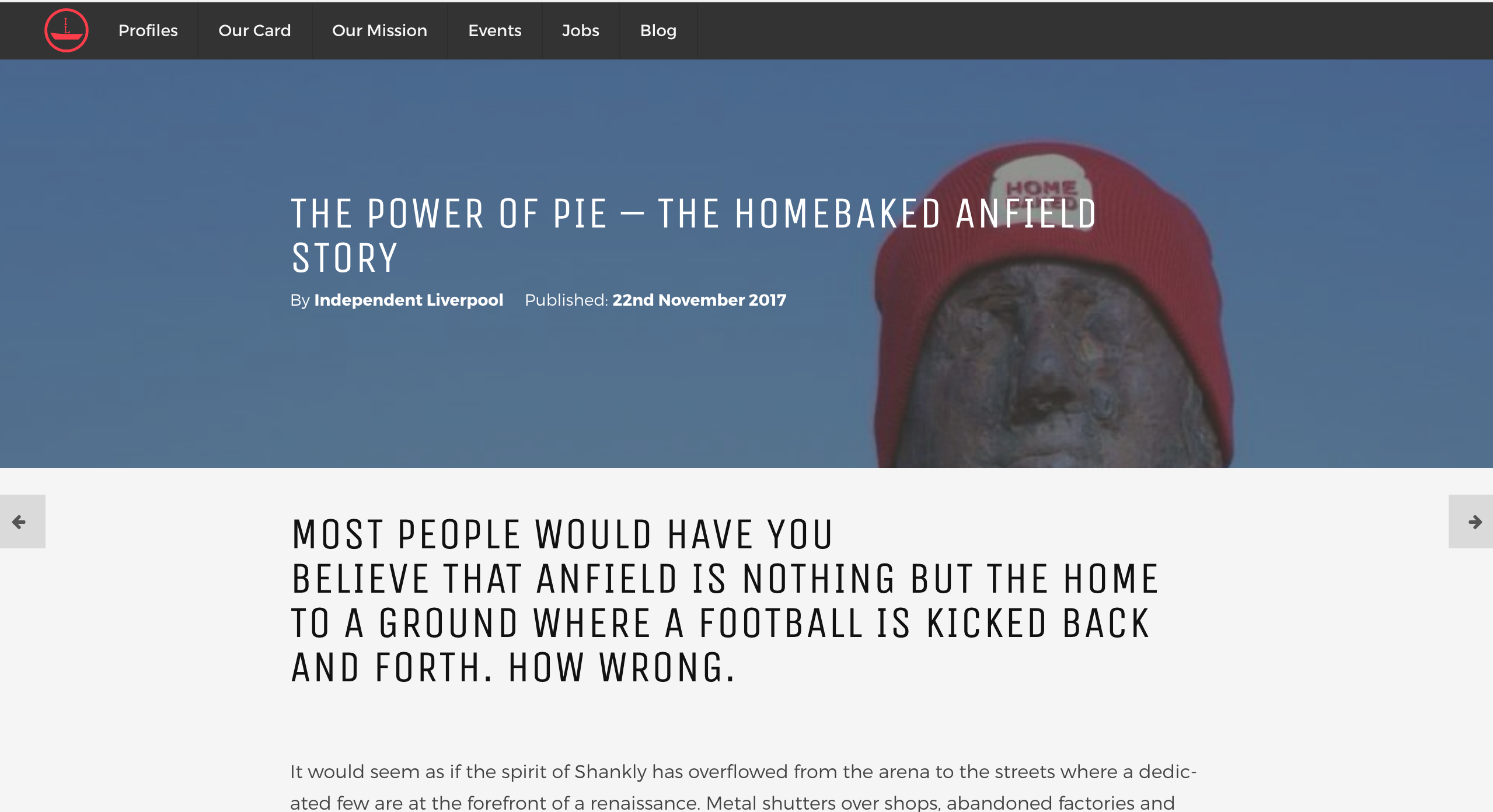 ‘We are the economy’: the community businesses coming together to transform Liverpool

may. '19
Great article in the Independent about community businesses working together all across Liverpool. Just in time for the opening of Kitty's Launderette on our High Street and of course our planning application going in.

nov. '18
Have a listen to this podcast about Homebaked's Story and people-powered High Street regeneration.

nov. '17
Our friends at Independent Liverpool recently wrote some very nice words about us. Read them here...

Homebaked in the Guardian

jun. '17
'This is not about gentrification’: the pie shop reviving an Anfield street

As Liverpool FC’s Anfield stadium gleams in the April sunshine, the abandoned, steel-shuttered houses cowering in its shadow serve as a poignant reminder of the impact developments can have on their host communities.

But in the unassuming bakery at the end of the terrace lies the heart of a movement working to transform this run-down area back into the vibrant neighbourhood residents remember.

The Homebaked cooperative bakery is in prime position to sell pies to some of the 40,000 football fans who come to the Anfield stadium on an average match day. What its customers might not realise is that in the back room of the Victorian premises a group of locals have cooked up a plan to transform the empty properties next door into 26 high-quality, affordable flats....

Read the full article at https://www.theguardian.com/sustainable-business/2017/apr/19/gentrification-liverpool-anfield-football-stadium-affordable-homes-cooperative-bakery-community

On March 10th 2017, Homebaked Co-operative Bakery won five awards at the British Pie Awards, including a Gold for its Scouse Pie. Not bad for a bakery that launched less than five years ago and almost didn’t launch at all.

The building where the bakery and café now sits, had been a local institution since it opened in 1903, and later became famous with fans visiting Anfield who called it, ‘the Pie Shop’. It had closed as a local residents, and local customers, were forced out of the area during the Housing Market Renewal Initiative (HMRI). Like much of the area, the building had been designated to be demolished along with 1,800 other homes and shops. It was the biggest loss of housing and commercial properties in the country as a result of HMRI.

HMRI was a New Labour Initiative, which was launched by then Deputy Prime Minister John Prescott in 2002 as a way to clear swatches of what the market considered low value housing, and replace it with new houses which would in turn increase the appeal of areas and the values of houses. Anfield and Everton were the two areas where HMRI would wreck it’s wrecking ball in the city. HMRI, along with a series of failed master plans for the area and a football unsure of whether they will move ground or not, had a devastating effect on the areas. Many houses – large terraces and family homes – ended up ‘tinned-up’. One-by-one on historic streets, sending the area into a slow decline. The threat of CPO’s forced families, some of whom had owned their homes for generations to remortgage and take out new loans to buy new homes elsewhere – away from the place they call home. The area lost many of its people, and with it, large parts of its identity.....

Read the full article at https://ethos-magazine.com/2017/05/home-and-pies/

jun. '17
Staff at the community-led bakery have thanked the public after an outpouring of support, and re-opened yesterday afternoon despite the incident.

Homebaked has become an Anfield institution since it launched as a co-operative, run by residents to support the surrounding community.

Run by volunteers, the Oakfield Road bakery is a favourite among Liverpool FC fans - with the Shankly Pie among its most famous creations.

Staff were shocked to find the bakery had been targeted by thieves.

Speaking to the ECHO, operations manager Luke Pilkington-Jones said: “When our first member of staff got in this morning they went into the back office and, as they have walked in, they have noticed the bay window that is covered by boards.

jan. '17
In 2016, our friends from Ethos Magazine spent time with us in the bakery over a few months to create a film about the work that we do. It turned out wonderfully and captured the spirit of the team, our friends and regulars wonderfully. Enjoy!

nov. '16
Fantastic article by Hazel Sheffield from www.farnearer.org, also featuring a video she made about us!

Read the full article at: https://thelongandshort.org/society/homebaked-liverpool-community-development